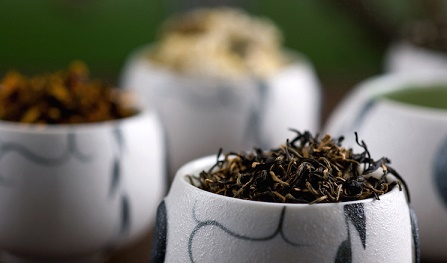 Initially, the production of tea consisted in the collection and drying of tea leaves. But during the Ming dynasty, people noticed that tea leaves oxidize when they wither. Fermentation allowed the leaves to acquire a new, richer and richer flavor, and thus was found a recipe for the production of black tea.

No one knows exactly who first opened the black tea. Like many discoveries, it happened by accident. According to legend, farmers in Ujikane not have time to process the leaves after they are collected, when a group of soldiers attacked the village. The next day the tea leaves withered. To save the harvest, the leaves decided to dry fire of pine wood. The villagers were pleasantly surprised by the result of this method of drying tea leaves, and the demand for this new type of tea began to grow exponentially.

Where did black tea come from? Black tea first appeared in the Wuyi mountains in Fujian. Today, black tea from this region is called «Lapsang Souchong»or» Zhengshan Xiaozhong». This tea consists of small leaves and buds. Its color tends to black, but can sometimes contain Golden buds. The premium version of the tea consists mainly of Golden buds, and this tea is called Jin Jun Mei .

The spread of black tea around the world

Before black tea was discovered, PU-erh tea was mainly sold. PU-Erh tea spread to Tibet and neighboring regions. Later, the Japanese became interested in Chinese green tea. But, really popular all over the world, tea became after the invention of black tea.

The Portuguese were the first to introduce tea in the West in the 16th century, led by the Dutchman Jan Huygen van Linshoten, 1563-1611. It is known that black tea improves concentration and health.

During the 17th century, the demand for tea grew rapidly, and the Dutch East India company led the black tea trade. However, the British East India company soon became dominant in the tea trade, after they successfully copied Chinese tea production and established it in India.

When tea bags were invented, the demand for tea reached a maximum. There were global tea brands such as Lipton.